Stax SRS-3100 Electrostatic Headphone System By George Graves Electrostatic headphones systems are generally very pricy. It’s just a fact of life. One can pay many thousands of dollars for just the 'phones alone, and whether one buys a budget pair, such as the excellent Stax SR-L300 (see my earlier review of February 21, 2020) which list for four-hundred and thirty US dollars or the flagship SR-009S which sell for a healthy $4500, it’s only half the system. One still has to posses a suitable amplifier/energizer for them because unlike dynamic 'phones, you cannot just plug a pair of true electrostatic headphones into the headphone jack of one’s amplifier or receiver.

Amplifiers for electrostatic headphones are available from an almost dizzying array of manufacturers. Stax makes a range of them and Woo Audio makes a couple as does companies such as iFi, HiFiMan, Headamp, Linear Tube Audio, Mjolnir, SPL Phonitor, etc. All of these have one thing in common: they all cost more than a thousand US dollars and many are more than $5000! The best of these that this reviewer has tried is the combination of the $4500 Stax SR-009S 'phones at $4500 and the Linear Tube Audio’s (LTA) Z10E at $6500 or Stax’s own SRM-700s (solid state) or SRM-700T (tube) at around $3400 US. That’s as much as $11,000! Now while that is quite a listening experience, and a lottery-winning dream, it is something that most of us will never achieve. Even the combination of the Stax SR-009S and the Stax solid state or tube amp is almost $8000. There must be a better (as in more affordable) way to get the joys of electrostatic headphone listening that mere mortals like you and I can afford without either going to the poorhouse or being hauled into divorce court!

Since about 2016, Stax has sold, to the Japanese and other foreign markets, a combination of an electrostatic headphone called the SR-L300 with a matching SR-252S amplifier as a complete system called the SRS-3100 for around the equivalent of a thousand US dollars. Unfortunately, up until recently, this combo was not available through Stax’s US distributor and was available here only through Amazon (and others) who deal directly from Japan. But understand, this is a Japanese market product and the amplifier came with a 12 Volt, 500 mA “wall-wart” power supply designed for Japanese domestic mains. The Japanese might use a mains plug that is compatible with US and Canadian electric systems, but the North American electric grid is nominally 120 VAC and the Japanese mains voltage is only 100 VAC. That might seem like a trivial difference, but believe me it isn’t. A 20% difference is way outside of normal design tolerances and can cause a 100 VAC wall-wart to run hot when connected to a 120 VAC mains. This could be a fire safety hazard if it wen’t undetected, not to mention the wall-wart would probably fail sooner than later. Of course, all one needed to do was to replace the supplied power supply with any 12 Volt supply that was designed for 120 VAC, as long as it has the proper current capability and the correct sized barrel connector with the correct polarity.

The Front Panel, from left to right, consists of a single Stax “Pro” headphone jack marked Pro Only. In the center of the panel is a single green LED power on light, and on the extreme right, there is a single black knob for power on/off and volume.

On the rear, again from left to right, are four RCA female jacks: Left and right line audio inputs and left and right parallel audio out. On the right, is a power jack to accept the included 12 Volt power supply module.

IOW, this is a basic no frills unit. It powers a single pair of Stax-style, pro spec headphones of any model and from any manufacturer. I have listened to this amp with a variety of electrostatic Stax compatible ‘'phones and all work fine. My favorite non-Stax pairing is the Jade 2 ‘'phones from HiFiMan.

Circuit-wise, the SR-252S is a Class “A” amp using an emitter-follower output configuration. The SR-252S is designed using some of the latest low-noise FETs in the direct-coupled signal path (no capacitors) and the latest high-speed, high-voltage transistors for the bias voltage section of the amp. This makes the SR-252S a clear improvement over the similar (but no longer available) SRS-323.

I was even able to make up a custom cord to run the SR-252S from one of those brick-sized 12 Volt emergency car starting batteries and it works perfectly in that configuration; allowing one to travel with the amp. While not as convenient as the Stax rechargeable SRM-D10 ($899 – US Price) portable electrostatic Earspeaker amp, it’s certainly a lot cheaper and better than nothing. 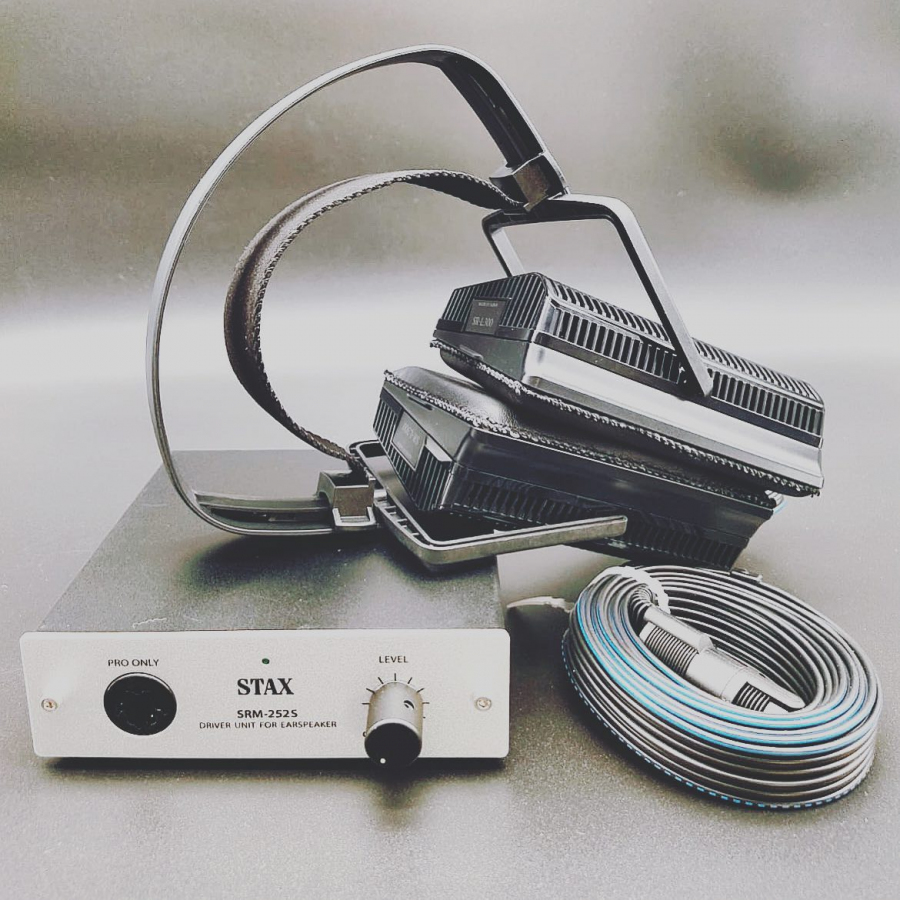 This entry-level system sounds surprisingly good. I already knew of what the SR-L300s were capable* as I was able to audition them using my personal HiFiMan Jade2 amplifier as well as the new Stax SRM-700T (a tube amp) and the fabulous and fabulously expensive LTA Z10E. The 300s did not disappoint on any of them.

Since the SRA-3100 is a complete system, unless one has access to other Stax pro system compatible headphones, it is pretty much impossible for most buyers to evaluate the 'phones and the amp separately. Luckily, during my tenure with the amp (I already owned the SRL-300 'phones) I had access to the aforementioned HiFiMan Jade2, the Stax SR-009S, and the Mr. Speakers Voce electrostatic 'phones. The Jade 2 system also afforded me the ability to audition all of these 'phones with the Jade2 amplifier. My conclusion is that the Jade2 amp and the Stax SR-252S amp are very similar in sound. Whether playing the Jade2 'phones or the Stax SR-L300 Lambdas, both amps pretty much disappear and the sound that one hears is mostly the headphones. There are a few differences in the amps, of course, but they really aren’t all that noticeable. The HiFiMan amp has slightly tighter bass (which I attribute to the Jade2’s bigger, more robust power supply). The Stax amp has a better high frequency presentation and is slightly quieter. But overall, I’d hate to live on the difference! The bottom line here is that the SR-252S is an excellent electrostatic headphone amplifier and sounds extremely good.

The joys of electrostatic headphone listening are many. The clarity, and lack of distortion coupled with the speed of the almost massless diaphragms in the 'phones make transients a fairly startling revelation! While not in the same league with electrostatics costing many thousands of dollars, if one’s headphone listening experience has, up to now, been limited to dynamic (magnetic) 'phones, even similar planar magnetic types, the Stax SRS-3100 system will be a real revelation. Be warned, this system is addicting and once you hear it, I can guarantee you that you will want to keep it. If one takes care of the 'phones themselves, their plastic build will last for many years as they are, as I said elsewhere, not in the least flimsy. The amplifier is worthy of just about any brand of compatible electrostatic headphone, not just Stax “Earspeakers”. In some markets, the SRS-252S is available stand-alone (in England, for instance, it sells for £450 or about US$600). Maybe Stax will see fit to offer the amp, by itself, in the US market as well. If you are in the market for new headphones, or even if you are just curious, I urge you to try the Stax SRS-3100, The system is better than the HiFiMan Jade2 system (the nearest price competitor) and considerably cheaper. I don’t see how you could go wrong.

*An aside here, The Stax Lambda Series consists of three models: the SR-L300 ($430), the SR-L 500 Mk2 ($792), and the SR-L 700 Mk2 ($1569). They all use exactly the same electrostatic element. The differences between the three models are build and materials. In the SR-L300, the entire headphone is plastic. That means the ear-cups, the ear-cup yoke and all of the headband components are plastic (all the ear-cups are the same). The SR-L300 also has very thin artificial leather ear-pads and the oxygen-free cable is non-detachable. The SR-L500 Mk 2 'phones have cast metal yokes and a detachable cable. The artificial leather ear-pads are also thicker. Finally, the SR-L700s have an all-metal frame (except for the ear-cups of course), a detachable cable, and the thickest pads of all.

I have read that the differences in sound are due almost entirely to the ear-pads. Apparently, The thicker they are, the better these 'phones sound. Ostensibly, if one bought a pair of SR-L700 ear-pads from Stax as replacements, and put them on a pair of SR-L300s, one would get the benefits (not to mention increased comfort) of the higher end model without the cost. There are also third party pads available that have been designed to fit the Lambda series, and they are much thicker than the stock ones. One other thing. Just because the SR-L300s are made entirely of plastic, one shouldn’t concern oneself with quality issues. The SL-R300s are well made, but as with anything plastic, they probably require a bit more care in handling than the two more pricy models, but they are anything but flimsy.